Homemade Gravy Recipe   -   Cajun Brown Gravy
If there is any one technique a person could learn in order to cook like a Cajun, it would be browning meat to produce a brown gravy. The browning of meat is a learned task and an important part of authentic Cajun cooking.  The essence of this dish will depend on how well the meat and vegetables are browned. Browning or glazing of the meat needs to be done on the highest heat available.
Homemade Gravy Recipe
Buy Wholesale   Contact Us Today
For those who have a homemade gravy recipe and have mastered the art of making a brown gravy the old fashion way, my hats off to you. I’ll do my best to explain how this is done for those who need a little help by breaking down the process. Important to note, my homemade gravy recipe is not made with any prepackaged gravy mixes. I’m sure gravy mixes are used elsewhere to cut corners here and there, but at the end of the day, it is not the real deal. Through trail and error you will perfect your own efforts and creat your own homade gravy recipe.
Getting prepared initially is important. I like to season all meat pieces prior to entering the pot. This seasoning will contribute to the “browning”, especially if a little sugar is part of the seasoning blend. Some meats are more difficult to brown than others and a little sugar rubbed on the raw meat will contribute to the browning of the gravy. I have used sugar when cooking chicken or pork. Chicken pieces are harder to brown than beef. There is less blood in chicken meat, therefore, less renderings to work with. Sugar does add sweetness to whatever you are cooking, so be careful. Also, a thick walled pot, such as cast iron or a magnalite roasting pot is recommended for heat control. Thin wall pots or pans generate hot spots resulting in burning. The idea is to brown without burning, which can be debatable topic concerning “brown” gravies.
I recommend viewing my homemade gravy recipe as a 3 step application. One - rendering out the meat; Two -  initial browning; Three- final browning with vegetables.
Step One
I start with adding a thin layer of oil to the pot and getting the oil very hot. The meat is added and will begin to brown until the water and juices start to bleed out of the meat. By no means will enough glazing occur at this time to finish the dish. Your goal is to allow all the liquids produced to boil out completely while never lowering the heat.
Step Two
Once boiled out and frying sounds can be heard, the browning of the meat can begin. This continues until you feel you may be burning the meat (10-20 minutes depending on how much meat, available heat, etc.). You can add a little water to the pot and see what color bubbles up to determine if it is burning and reduce heat accordingly. Continue on and build up the glaze at the bottom of the pot as much as possible. When you think you have enough glaze, allow another 5-8 minutes, trust me! Now you will want to deglaze the bottom of the pot to release anything that has coated the bottom. Do this by adding 8-10 ounces of water and stirring vigorously until the pot bottom is free of glazing.
Step Three
The liquid must be boiled out again to repeat the browning process. Listen for the frying sounds then add the vegetables (not the green onions) and any additional meat items if call for in a recipe. Continue browning, as described above, then add enough water at the end of browning to barely cover all of the meat.  What results from this process should be an earth tone brown gravy with meat that is ready to be tenderized.
Final seasoning and touch-up to the gravy will be done after the meat is tenderized. To often meat is served tough because it is was not allowed to simmer long enough. Any cut of meat can be tenderized if cooked the proper amount of time and in the right environment. With the meat submerged in the newly made gravy, cover and simmer.
Chicken should simmer for 40 min covered. Pork & beef should simmer a minimum 1:15 minutes covered.
Good luck experimenting with my homeade gravy recipe!

Should you have any questions or would like to discuss a Cajun Catering Services please feel free to
Thanks Again For Visiting!
Making a brown gravy is a serious subject in the kitchen of Cajun folk. Sometimes the main attraction of getting together, as friends and family, is the enjoyment of a “brown gravy”. This is not fiction people. I’m certain this happens everyday of the week in South Louisiana and the gatherings are nothing short of a celebration. 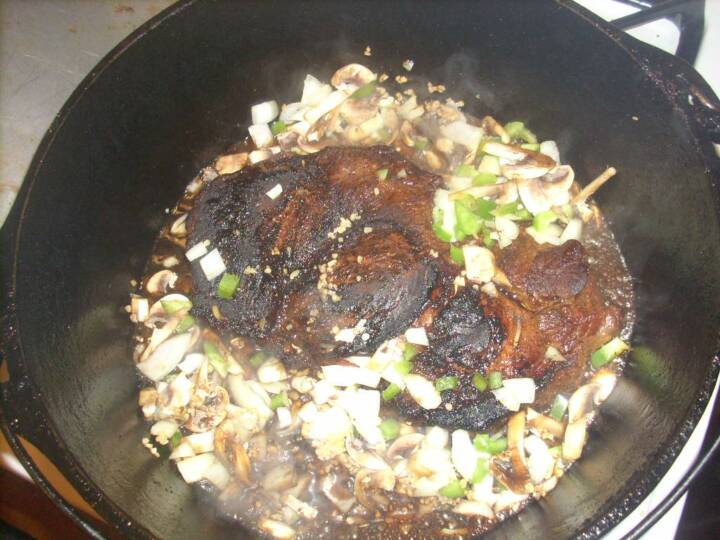